How we rally behind our son with Celiac Disease 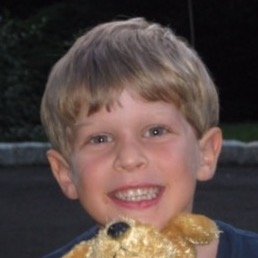 The short version is that we are the Healthy Gluten-Free Family because of this sweet boy. Seven years ago this month (ironic that it’s Celiac Disease Awareness Month), our youngest son was diagnosed with Celiac Disease just weeks before his fifth birthday. Celiac is an autoimmune disease whereby the body cannot digest any amount of gluten, a protein found in wheat, barley and rye. In fact, if gluten is ingested, the body responds by attacking the small intestine and inhibiting the absorption of nutrients. The only treatment is to adhere to a strict gluten-free diet. And so our journey began… 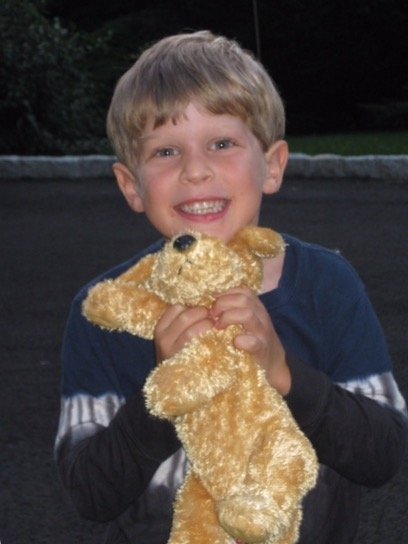 Flash back to 2010, when gluten and celiac were not household names and there were not nearly as many gluten-free products on the market as there are now.  My son was barely five years old, and his favorite food was pasta (yikes!).  My first response was there was no way he was not going to eat pasta! While pasta was his favorite food, and still may be, he was also my little foodie. And that may be the single biggest driver that started this blog.  He loves to try new foods and flavors and really enjoys the entire dining experience. Even at a young age,  he was always the last to leave the dinner table, savoring every bite.  He is the child who asks to try food off your plate at home or at a restaurant.  He is the child that likes to help in the garden and eat kale & cucumbers right off the vine.  He’s also the child that prefers real food over snack food any day of the week.  I was determined that Celiac would not stand in the way of my little boy’s joy of food.

I decided right then and there, that if my son wanted to try a food and we couldn’t find it anywhere, I would make it. So with all the passion of a mom, and a trained marketer, I threw myself into the gluten-free world. We tried every product we could get our hands on (and remember in 2010 some of them really did taste like card board) and experimented with endless recipes.  My son would look at my cooking magazine and point to dishes he wanted to try.

Ultimately, we learned to cook and live gluten-free.  Our house is 90% gluten-free (there are bagels, bread and a separate toaster for my gluten-eating, older son but more about that in another post), when we cook,  bake or grill it’s 100% gluten-free, we entertain gluten-free, when we dine out I always eat gluten-free so he can try food off my plate.  And thus, to support him, we became the Healthy Gluten-Free Family. 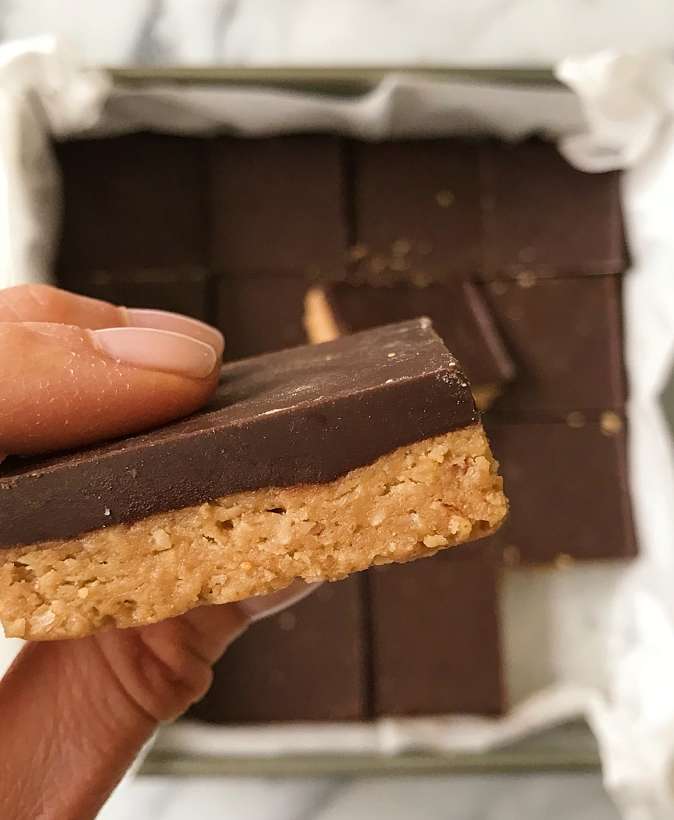 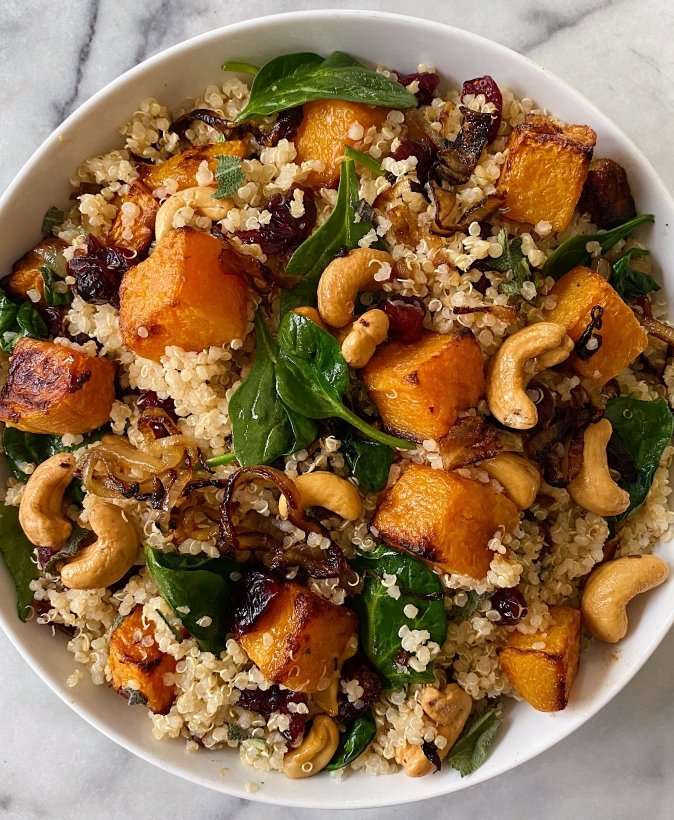 Channeling Summer with CAPRESE ZOODLES with Roasted Tomatoes and Basil Pesto... the easiest dinner ever !🌿🍅🙌🏻.. . I make this a lot in the Summer when tomatoes & basil are in abundance. But it’s equally tasty on a cold winter day when you want something fresh and delish!🌟.. . The details 👉 Roasted cherry tomatoes, fresh mozzarella, black olives and zucchini noodles all tossed with a homemade basil pesto. (Nut-free vegan option on recipe too👌). Super simple & satisfying!😋.. . Click @healthygffamily for the recipe link https://www.healthygffamily.com/recipe/caprese-zoodles-with-basil-pesto/ .. . Hope everyone had a great day! 🤗.. . . . . . . . #glutenfree #wholefoods #eattherainbow #realsimple #EEEEEATS .

Made a fresh batch of MINI #glutenfree TWIX BARS today... want one? 😋🤗.. . Hadn’t made these in waaaayyy too long and decided to restock the freezer.🙌🏻 Recipe adapted from Gal @holyhealth , we first made these last winter and they quickly became a fan favorite!😍.. . Just 10 real, whole food ingredients, Gluten-free, Vegan and Paleo-optional, these bars are a healthy version of the classic and SO YUMMY! 😋 They are also super EASY to make with 3 simple layers: A “shortbread” cookie base, maple-date caramel middle and chocolate topping.🤤.. . Watch me make them on IG stories 🎬 and click @healthygffamily for the recipe link, https://www.healthygffamily.com/recipe/mini-twix-bars/ .. . Hope everyone had a great day! 🤗.. . . . . . #wholefoods #realfood #realsimple #eeeeeats .

Taco Tuesday Staycation Style! GRILLED SHRIMP TACOS with CORN SALSA 🌮🥑🌽💃 (Vegetarian friends 🙋‍♀️, substitute black beans for shrimp & it’s soooo good!👌).. . Just because we didn’t go away this Feb break doesn’t mean I can’t dream of warmer weather and Tacos by the sea 🌊😉. The details 👉 Grilled or sautéed Chili Lime shrimp (or black beans!), topped with the yummiest corn salsa, some red cabbage, avocado and a squeeze of fresh lime juice.😍.. . Super QUICK & EASY to make, these tacos are fresh, flavorful and perfect ANY day of the week😋.. . Click @healthygffamily for the recipe link https://www.healthygffamily.com/recipe/grilled-shrimp-tacos-with-corn-salsa/ .. . Hope everyone had a great day! 🤗.. . . . . #glutenfree #wholefoods #eattherainbow #EEEEEATS #glutenfreerecipes .

For the love of garlic! GARLIC LOVERS BROCCOLI & CHICKPEA SALAD 🥦😍😍.. . This simple but hearty salad is bursting with flavor!💥 It’s just for 4 main ingredients— Broccoli, chickpeas, sun-dried tomatoes & feta, + plus lotssss of garlic and herbs. The flavors by themselves are amazing, but the key is in preparing the broccoli so it’s tender-crisp with just the right amount of crunch👌.. . Bonus: easy to make, makes a large quantity and won’t wilt... so perfect for meal prep or a crowd.👌.. . Watch me make it on IG stories 🎬and click @healthygffamily the recipe link https://www.healthygffamily.com/recipe/garlic-lovers-broccoli-chickpea-salad/ .. . Hope everyone had a great day! 🤗.. . . . . . #glutenfree #wholefoods #eattherainbow #glutenfreerecipes #EEEEEATS .

Simple Sunday Stir Fry! GENERAL TSO’S CHICKPEAS + VEGGIES 🌿🍚😍.. . Raise your hand if you also love a good stir fry!🙋‍♀️ If you’ve followed me a while, you know it’s a go-to dinner for us... and this General Tso’s sauce is one of our favorites!🌟.. . Here we switched up the veggies and stir fried some cauliflower, snow peas and bok choy, plus chickpeas for me and chicken for everyone else, over rice. Quick, nourishing and bursting with savory deliciousness!😍.. . An easy meal any day of the week— whip it up last minute, or sauce can be made ahead and veggies chopped so it’s super quick! 💫 Have you tried it yet?.. . Watch me make it on IG story highlights 🎬 and click @healthygffamily for the recipe link, https://www.healthygffamily.com/recipe/general-toss-chickpeas-veggies-3/ .. . Hope everyone had a great day!🤗.. . . . . . . #glutenfree #wholefoods #eattherainbow #easyrecipes #glutenfreerecipes .

Homemade classic & creamy #glutenfree MAC AND CHEESE… who wants some?😋🤗.. . Seriously, is there anything more cozy? Creamy, cheesy and flavorful mac and cheese topped with crisp breadcrumbs for a little crunchy contrast. Rich & indulgent-tasting and sooooo good!😍.. . Bonus: It’s super easy to make, makes a large quantity and reheats well.👌.. . Watch me make it on IG stories 🎬 and click @healthygffamily for the recipe link https://www.healthygffamily.com/recipe/classic-mac-and-cheese/ .. . Hope everyone’s having a great weekend! 🤗.. . . . . . #wholefoods #eattherainbow #realsimple #EEEEEATS .

Made with love 💕 FLOURLESS UBER-CHOCOLATEY COOKIES and #glutenfree SUGAR COOKIES with sprinkles 😋🤗.. . Teen boys may not want cutesy valentines from their mother 🙃, but they never say no to cookies!😃 So made two of their favorites.. . The Flourless Uber Chocolatey Cookies are slightly crisp on the outside, then chewy, fudgy and super chocolatey on the inside.😍They taste rich and decadent but happen to be naturally gluten-free, #dairyfree free and butter-free! AND they only take 10 min to prep, 10 mins to bake! 🙌🏻.. . The Sugar Cookies with sprinkles are a fan favorite here— Crispy edges, chewy center and not overly sweet, despite their name. 😍 Plus, they’re gluten-free with option to be dairy-free and egg-free. 👌.. . So which would you choose? 😋🤔.. . Watch me make them on IG stories 🎬 and click @healthygffamily for the recipe link https://www.healthygffamily.com/recipe/flourless-uber-chocolatey-cookies/ ... . Hope everyone has a great weekend! 🤗 .. . . . . . #easyrecipes #EEEEEATS #glutenfreerecipes .

Dinner & Dessert! (Swipe left) VEGGIE FRIED RICE for a one-pan win 🙌🏻 And HEALTHIER RED VELVET CUPCAKES with (naturally dyed) Pink Cream Cheese Frosting for a fun Valentine’s Day dessert idea! 💖😋🤗.. . I asked on stories if I should share a dinner idea or more Valentine’s Day treats… Of course it was split 50-50 😂🤷‍♀️. So sharing both… . Dinner was a fan favorite: Veggie Fried Rice made with part cauli-rice. Quick & easy, ONE PAN, cleans out the fridge and always delish!😋.. . As for Valentines dessert ideas 💕, I’m swiping up to tons of yummy treats on IG stories... but couldn’t let Valentine’s Day pass without spotlighting these Healthier Red Velvet Cupcakes.🥰 A secret ingredient gives these rich, chocolate cupcakes the most amazing soft texture + a fabulous pink hue to the cream cheese frosting.💗.. . Click @healthygffamily for the recipe links. I will link the cupcakes at the top of the fried rice on the website. And I will also swipe up on IG stories. https://www.healthygffamily.com/recipe/quick-easy-vegetable-fried-rice-2-2/ .. . Hope everyone had a great day! 🤗.. . . . . #glutenfree #wholefoods #eattherainbow #realsimple #EEEEEATS .

Love at first bite! LEMONY CHEESECAKE SQUARES with RASPBERRY SWIRL 💖😍🤗.. . I just made these again today so I could show you how EASY they are on IG stories 🎬 (and, because they are my husband’s favorite ❤️), and omg... these are TOO GOOD!🤤.. . Creamy & luscious Lemony Cheesecake + Graham Cracker Crust + Raspberry Swirl for some Valentine’s Day fun. 💕 The perfect balance of sweet & tart and so YUMMY!You are going to looovve them! 🥰.. . Watch me make them on IG stories 🎬 and click @healthygffamily for the recipe link https://www.healthygffamily.com/recipe/lemony-cheesecake-squares-raspberry-swirl-2/ .. . Hope everyone had a great day!🤗.. . . . . . . #glutenfree #wholefoods #easyrecipes #EEEEEATS #glutenfreerecipes .

Sunshine in a bowl! BLACK BEAN VEGGIE QUINOA SALAD ☀️😋😍.. . When the sun came out late this afternoon, for the first time in what seemed like foreverrrrr, I changed up our dinner plan to include this happy salad! 🙌🏻 Super quick and easy, this fresh and simple salad is one of our favorites.😍.. . It’s made with all items we already had in the house, and is so versatile & delicious. It tastes great with greens, avocado, grilled chicken, even chips. And best part… there’s some leftover for lunch tomorrow 👌.. . Click @healthygffamily for the recipe link. https://www.healthygffamily.com/recipe/black-bean-veggie-quinoa-salad-2/ .. . Hope everyone had a great day! 🤗.. . . . . #glutenfree #wholefoods #eattherainbow #realsimple #EEEEEATS .

A packed lunch that’s easy to love!🍱🥗🍎.. . I constantly get requests for lunch ideas. On Instagram stories, I share my lunch almost daily— usually a big hearty salad, repurposed leftovers, or quesadilla. But when I need to PACK lunch, this is my favorite combo!👌.. . Homemade Veggie SUSHI (soooo much easier than you think!), a green salad with MISO GINGER DRESSING that tastes just like the restaurants (thank you @markbittman !), and some snacks— here I have an Almond Butter Chocolate Chip Energy Bite and No Bake Chocolate Peanut Butter Bar. 😋.. . Stays fresh and is a satisfying combination of flavors and textures. 😍.. . Watch me make the sushi & Dressing on IG stories and click @healthygffamily for recipe link https://www.healthygffamily.com/recipe/packed-lunch-homemade-veggie-sushi-miso-ginger-dressing/ .. . BONUS: If you don’t want to make your own sushi, I have a new blog posts with tips on how to order out sushi safely #glutenfree . 👌.. . Hope everyone had a great day! 🤗.. . . . . #wholefoods #eattherainbow #realsimple #glutenfreerecipes .

Savory VEGETARIAN BOLOGNESE for a cozy end to the weekend.🍝😋🤗.. . Have you ever made a vegetarian Bolognese? It’s super easy, hearty and the flavor is UNREAL!💥 It starts with all the usual suspects -- carrots, onion, celery, crushed tomatoes, dry red wine, and herbs-- but instead of meat, uses high flavor cremini mushrooms, dried porcini mushrooms and simmers with a piece of Parmigiano-Reggiano rind. Uber SAVORY and DELISH!😍.. . Watch me make it on IG stories 🎬 and click @healthygffamily for the recipe link https://www.healthygffamily.com/recipe/vegetarian-bolognese/ Recipe adapted from @cookinglight , it's been a favorite for years.. . Hope everyone had a great day! 🤗 Anyone else watching the Oscars tonight? 🏆🌟.. . . . . . . @barillaus #glutenfree spaghetti #wholefoods #eattherainbow #easyrecipes #glutenfreerecipes .